I first heard of Mike Foster through his YouTube show: Analog Attack. I randomly caught one of his Barney Greenway (Napalm Death) interviews one day and started to delve deeper into his episodes.

On his channel, Mike covers many aspects of the vinyl world as well as interviews with musicians and various characters from the record collecting world. There’s something for everyone on his channel and I highly recommend you check it out.

How did you get into collecting records?

That’s a good question. I am one of those odd people who don’t consider themselves to be a record collector as such. Just someone who buys a lot of records haha. I know how I got into buying records. By listening to the Tommy Vance Friday Rock Show.

If I liked a band I heard on his show I would try to find a record by them. That is how I started buying Motörhead records and the ones I am going to mention in question 2.

Also, weekly publications like Sounds and NME, then latter Kerrang!, and then later after that punk fanzines like Maximum Rocknroll. I’d just read the reviews.

Back then, I could generally only afford to buy one record a week (although I seem to have gone wild on that trip to Acorn Records), because I was a schoolboy or unemployed. 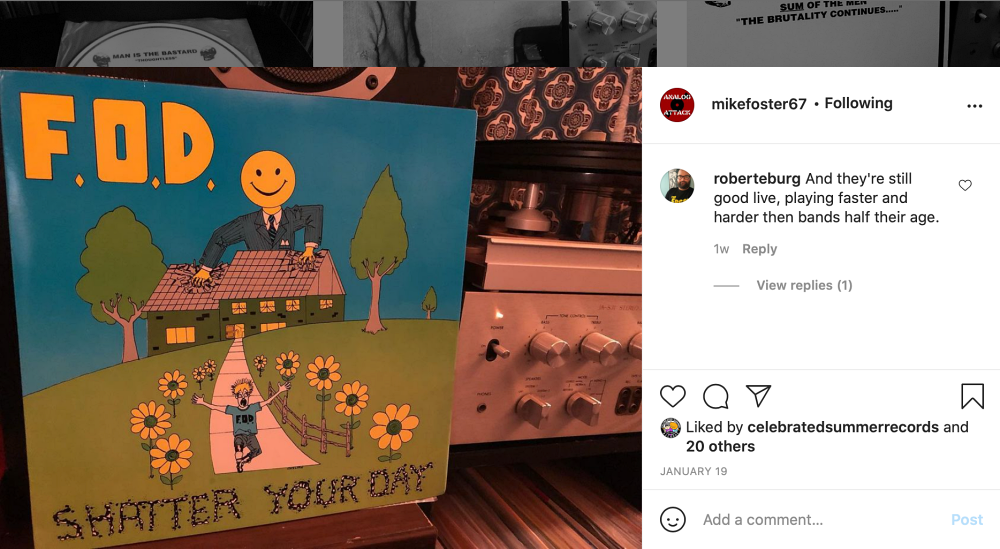 What was the first record you bought with your own money?

That would either be Pink Floyd – Relics or Black Sabbath – Heaven and Hell. It would have been 1980 and I was 13 years old. I bought those records in Woolworths on the high street in Sherborne, a small, sleepy town in rural Dorset, England.

The records were near the birthday cards section. Not long after that I made a trip to nearby Yeovil, and went to a proper record shop, Acorn Records and bought Led Zeppelin 4, AC/DC – Back in Black, and some other hard rock records.

How did you end up moving to Japan from the UK and how did that shape your record collecting habits?

I had gotten deep into Japanese hardcore in the mid 80s and visited Japan for the first time in 1990. To cut a long story short, because of running a distro in England that sold Japanese hardcore records and various circumstances connected with that, I ended up moving to Japan in 1998 or so.

The way it shaped my record buying habits was that I had to sell all my records to fund the move to Japan, and then I didn’t buy a record again for about 10 years [laughs].

What is your collecting philosophy? What do you collect and why?

My philosophy is “don’t pay more than $30 for a single or $80 for an LP.” Honestly, I don’t really have a philosophy as such, but I think records are things to be enjoyed, and to be played.

They are not things that should be handled with white gloves and displayed in glass cases. Play them! Play them for your friends! Let your friends touch them even if they don’t know what a record is! Enjoy them!

I remember I used to go to my friend Steve Oakley’s house (the person I would say who got me into hardcore punk) and he would have all his records strewn about the floor, out of their sleeves, in front of the electric fire. He never even considered that any of those records would be worth a lot of money decades in the future.

We would just get drunk and listen to the records and they would get splashed with cheap cider? I am not saying that I do that now at 53, and I haven’t really outlined a philosophy, but I think people understand what I mean.

Oh and I buy records because it gives me a lot of joy. And sometimes it causes me a lot of problems, but hey, swings and roundabouts!

We all have one record that we sold that we completely regret, what is yours?

I can’t think of one in particular, but the Japanese hardcore records I literally gave away sometimes give me a pang of regret. Even in 1998 I didn’t think that any of them would skyrocket in value but here we are now.

I am talking about things like Bastard – Wind of Pain, Lip Cream, and Deathside LPs, etc. I now have all of those LPs back.

The ones which I won’t even attempt to get back are sort of C grade Japanese hardcore records that were pressed on flexi discs and used to be $3 but are now $100 or something. I refuse to play that game.

You run the YouTube show Analog Attack, talk about that and how has doing the show influenced your collecting?

Yeah, there are basically 2 kinds of shows that I do. Ones that I do by myself and just talk about records, mostly punk and metal, and then ones where I have a guest on, and we do the same. The ones with guests have definitely been my favourites.

Lou from Sick of It all, Barney from Napalm Death, Brian from Dropdead, Dave Witte from Municipal Waste, Chris Corry from many bands, etc. I’ve been lazy this month (January 2021) but I have a lot of things planned. The show hasn’t influenced my record buying at all, but I hope it’s influenced the people who watch it!

What do think about the values of rare punk records skyrocketing? Do you think the bubble will burst?

I think it’s kind of ridiculous and there are clearly a whole bunch of reasons why it has happened, and in some cases I would say that the current market value of certain records is justified. Records that were pressed in very small numbers back in the '80s and are actually good.

What’s a good example? I dunno..The Fix – Jan’s Room, something like that.

There are a lot of people out there with money to burn who are willing to pay 1,000 dollars for a “KBD punk” 7 inch that is probably not that great. I would rather buy a Saxon LP for $7, and spend the change on some '90s crust LPs.

I can’t see the bubble bursting on this. The prices only seem to be going up, but there are definitely certain trends within punk. Like you used to be able to find I dunno ….Finnish hardcore singles from the '90s in every bargain bin in Osaka and Tokyo. Now all of a sudden you can’t.

What’s the most you ever shelled out for a record?

In real terms, probably GISM – M.A.N LP with the poster. I can’t remember the exact price but I had a very low paying job at the time and it seemed like a huge amount of money to me. It was probably $40 or something [laughs].

Name a record or records you can’t live without.

GBH – Leather Bristles Studs and Acne 12 inch. I am going to stop there because I can already feel a huge list coming on so I am going to make a very tough decision and go with that one. It’s a classic.

What are the top records on your want list currently?

I don’t keep an actual wants list, either as an XL spreadsheet or a grubby piece of paper, but off the top of my head I would really like a copy of The Apostles – How Much Longer? LP.

Is there anything that really bothers you about the record collecting scene?

[Laughs] Where to start? There are a few things but the thing that annoys me the most are record labels making stupidly low runs of reissues of records that were also originally a bit to hard to find, and then doing “Die Hard” versions on stupid splatter vinyl that will appear in the used market in about a month at ridiculously high prices.

I am also not a fan of Record Store Day and what I call Discogs culture. With that said, I understand that both of those are greatly helping out small record shops at the moment. I have done a few episodes about that on Analog Attack.

I kind of want to rant on a bit about a few other things I don’t like about record collecting and record collectors but let’s keep this light!

What do you foresee for the future of vinyl and collecting?

Increasing prices, more splatter vinyl, bargain bin '80s pop records going for a month’s wages. I dunno, I feel lucky I live in a city that has maybe 30 or more used record stores, a handful of those of which are dedicated punk and/or metal stores. I sometimes wonder how life is for the collector who lives on a mountain with no internet connection.

Do you plan on growing old with your records or do you have an exit strategy?

Exit strategy? Like driving off a cliff in a VW van with all my records in the back? Nah, unless I find myself in incredibly grim circumstances I plan to spend my retirement with my records strewn over the carpet, out of their sleeves, in front of the electric fire, with a can of beer in my hand.

What’s a record or genre in your collection that might surprise the readers?

That used to be Kate Bush but I don’t think that’s surprising anymore. I currently have more jazz records than punk records. That might be surprising. I also love old (and some new) African music and I would like to point people in the direction of Analog Africa, one of the best labels (any genre) out there.

Andrew Orlando has played guitar in such bands as Black Army Jacket, Hope Collapse, and Disnihil. He lives on Long Island, New York with his wife and two kids. Follow him on Instagram.